Confucianism was popularised by Confucius in the era of Spring and Autumn, dated back to 551 – 479 BC. It was recorded in the history as a proper set of Ideology Thinking or Philosophy. Confucius had established that education cannot be confined exclusively for the elite few and government officials of that time. His biggest contribution was to let all humans have education as long as they have this burning desire to learn. (有教無類)

The fundamental teachings of Confucian are about building the inner as well as the external values of a person, and to interact harmoniously with people. He focuses on following a proper protocol in relationship between the ruler and the ruled, husband and wife, and father and son. Thus in his preaching, he emphasizes to inculcate the human values of filial piety, benevolence, justice, etiquettes, wisdom, camaraderie and trustworthiness. (仁義禮智信)

Confucianism differs from the religions and Daoism in various aspects related to the universe, science, Mother Nature and society. Confucianism merely places emphasis on eternal subjects, such as human and social interactions.

In brief, Confucians teachings require Dao to reflect five virtues of benevolence, justice, uprightness, knowledge and trustworthiness (仁，義，禮，智，信) in human beings. In short, in order to embark on this virtuous path, we must pursue the spirit of righteousness (行善) and filial (行孝). 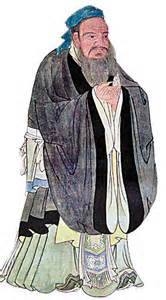