Lu Ju or Lu Dongbin, or he named after himself as ‘The Returned to Dao Person’ and according to the Li Shi-Zhen Dao Xian Comprehensive Text, he was born in the twelfth year of Tang’s Zhen guan (year 638) on the fourteen day of the fourth month. Legendary belief that on the day he was born under a tree, an abnormal ‘scent’ was surrounding the trail path. He was a bright and smart kid and he could memorise many difficult words and sentences very well. He stood at 8 feet 2 inches tall (not so sure about the actual
measurement though!), yellowish face with a stiff smiling face. It was said that he failed his scholastic examinations three times before he finally passed Jinshi(進士), he then served the Tang’s Kingdom for 31 years. One day he was awaken by the ‘Huang Liang Dream’ that said eventually he would ended up being killed by the King. He left the palace and followed his Master Zongli to practise Dao and eventually became immortal (成道成仙).! He is an Icon
for today’s Daoism world. 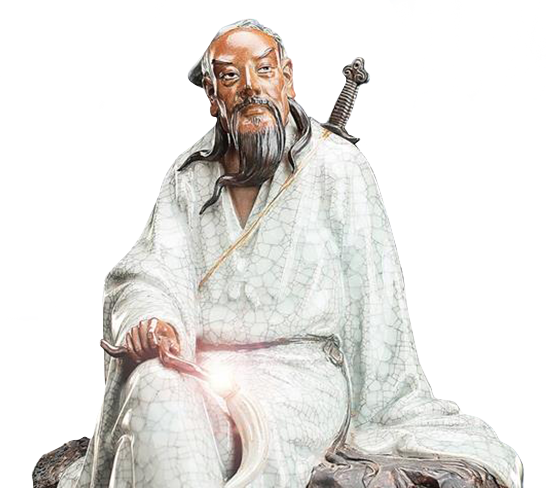 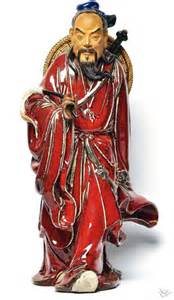 The Life of Lu Ju

Lu Dong Bin with surname Lu name Yan (姓呂名岩), words Dong Bin (字洞賓), with ‘official’ name Chun Yang (Pure Yang) (號純陽子) ， called himself the Person Retuned to Dao (自稱回道人). He was born in Tanghe County’ Wing-lok District (唐河中府永樂縣). He had the ambition to become immortal since childhood. He’d lived a normal and frugal life. He’d failed couple times in the Chang An imperial examination. One day he was awaken by “Huang Liang Dream’. In his dream, he dreamt that he had a perfect life with two wives and luxury living but one day due to his single mistake, the King killed his whole family and he was being chased after by a troop. He then realised the meaning of life and gave up his status to follow Master Chung to become a full Daoism. He practised Dao in Nan Shan Her Ling (南 山 鶴 嶺 ) together with Master Chung and subsequently became one of the 8 immortals (Deities) in the Chinese History. He had and still has a mega ambitious that is to educate people by eliminating bad karmic via training of both mind and body (通曉修行性命之道)
(Series from “Taoist Culture Library” page 道教文化資料庫)


Dao De Ching chapter 67 mentioned: firstly, compassion (慈) with loving attitude, secondly, thrift or frugal (儉) to live a simple life and third do not undermine the Mother Nature (不敢為天下先) by your ego and try to live a
humble life.

“Ancient deity and human heart is indifferent, but not today.” 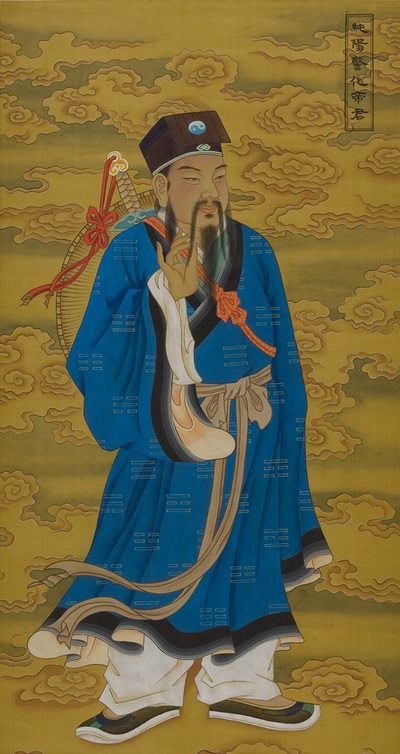 Watch what you do and say… you could be tested!

There is a legend that when in Chang An,  Lü was tested by Zhongli Quan ten times during a drinking session before Quan accepted him as his disciple. Lü subsequently went on to become an immortal. These ten trials are described below:

Test 1:One day Lu Ju came back from work and discovered that his family members were seriously ill and they subsequently passed away. Without expressing any sadness, he went about preparing dresses and coffins necessary for their burial. Later, however his family members returned to life and lived on. Lu Ju again expressed no joyous feeling at their revival. (The basic principle to become an Immortal is emotional management skill and the accompanying liberated ability)

Test 2:Lu Ju was selling stuff at a market when a buyer came to him and started bargaining with him. After agreeing on a price, Lu Ju handed him the agreed item, but the buyer refused to pay him in full and walked away with the item. Lu Ju did not argue with the buyer and let him take the item. (An important tenet to lead a trouble-free life is to practice relaxation and avoid unnecessary grievances, of course dictated by circumstances)

Test 3:On the first day of lunar calendar, Lu Ju met a beggar, Though Lu Ju gave him some alms, the beggar kept asking for more, and even uttered vulgar words. Lu Ju simply smiled and left the spot. (Patience is the key to becoming an Immortal)

Test 4:Once when Lu Ju was a shepherd, he came across a hungry tiger who wanted to snatch the goats that were under his care. Realizing the danger, Lu Ju sent the goats down the hills and bravely stood in front of the tiger. The hungry tiger looked at Lu Ju with awe and left the place without hurting him. (Inner value of selflessness is vital for an Immortal)

Test 5:Lu Ju was mediating in a small hut on a mountain when a beautiful and gorgeous lady suddenly appeared and asked him to let her stay for the night since she was lost. That night, this lady kept flirting with Lu Ju and tried to lure him to have sex with her, but Lu kept away from these temptations. (Inner self control to avoid illegal sex is imperative for Immortals)

Test 6:One day when Lu Ju arrived home, he found the house burgled and all his belongings lost. Without showing any signs of anger or remorse, he started to work on his farm. Suddenly, as he dug further, he discovered countless gold underneath. Without displaying greed, he continued to excavate the earth and did not take a single piece of gold. (Inner value of containment is paramount for Immortals)

Test 7:Lu Ju bought some bronze utensils from the market, however when at home, he realized that all the utensils were made from gold. Lu Ju immediately returned the utensils to the seller. (Greed would hinder a person from being an Immortal)

Test 8:A crazy Daoist was selling medicine, by telling people that this magic potion will cause instant death and make them Immortals. No one dared try this medicine, however Lu Ju bought the potion and consumed it, but the medicine caused him no harm. (Testing the ability to overcome fear)

Test 9:A river was once in a state of flood as Lu Ju crossed it with other passengers on a boat. During the journey, as the weather started to get from bad to worse, all the passengers except Lu Ju got nervous and worried. This was because Lu Ju took life in its stride and never worried about the transition from life to death. (Remaining steady in chaotic situations would enable one to wade through difficult times)

Test 10:Once when Lu Ju was alone at home, weird things suddenly started to happen; he saw ghosts and monsters killing each other and wanted to do the same to Lu Ju. Lu felt no fear and without paying any attention, he kept doing his chores. Another devil, drenched in blood, tried to take Lu Ju’s life, insisting that he owed his present life to him since in his previous life, Lu had killed him. Without any fear, Lu Ju asked the devil to go ahead and kill him now since it would be fair as he had taken devil’s life in his earlier life. Suddenly the sky turned blue and all the ghosts and devils disappeared; instead appeared, looking straight at him, a smiling Straight Yang Zhongli Quan, who happened to be his master and mentor in Daoist teachings. (Daoists believe that things happen for reasons and our past lives influence the current life we live in)

These 10 tests proved that Lu Ju is a pure and dignified person with the right attributes. Master Zhong was therefore very satisfied and happy, and willingly took Lu Ju to Nan San Her Ling to pass his secrets of life and subsequently formed a ‘Zhong Lu Golden Dan’ sect of school. But Lu Ju was not too fond of the secrets passed on to him. He instead developed his own formula for inner peace to benefit more human beings. Many until today practice this path of the Immortals. This was Lu Ju’s major contribution for the humanity as he helped many people to trudge on the right path and improve their health as well as living conditions.